WASHINGTON — Democratic and Republican leaders are scrambling members of Congress back to Washington late Thursday night because they suddenly believe the $2 trillion economic relief package might not pass by the voice vote planned for Friday and could be delayed if at least 216 members don’t show up to vote on the floor.

Members are now racing to get back to D.C. by Friday morning — in the middle of the coronavirus pandemic — because leaders fear at least one member, likely Rep. Thomas Massie, R-Ky., will demand a recorded vote.

Rep. Fred Upton, R-Mich., wrote on Twitter Thursday evening: “The CARES Act is historic legislation, which is why I’m driving back to DC to help get this thing over the finish line.” The drive from his Kalamazoo-area district is nearly 10 hours back to Washington.

Other Democratic members were pointing a finger at Massie on Twitter as they hustled back to Washington.

“If you intend to delay passage of the #coronavirus relief bill tomorrow morning, please advise your 428 colleagues RIGHT NOW so we can book flights and expend ~$200,000 in taxpayer money to counter your principled but terribly misguided stunt. #thankyou,” wrote Minnesota Rep. Dean Phillips.

Let our news meet your inbox. The news and stories that matters, delivered weekday mornings.

Dear @RepThomasMassie: If you intend to delay passage of the #coronavirus relief bill tomorrow morning, please advise your 428 colleagues RIGHT NOW so we can book flights and expend ~$200,000 in taxpayer money to counter your principled but terribly misguided stunt. #thankyou

“I am jumping on the red eye tonight… thanks Massie,” Arizona Rep. Ruben Gallego tweeted.

“Members are advised that it is possible this measure will not pass by voice vote,” House Majority Leader Steny Hoyer’s office wrote in an advisory to members tonight.

Ultimately, passage isn’t in jeopardy — but it could be delayed for as long as it takes for 216 members to arrive in Washington. The House gavels in at 9 a.m. on Friday and is expected to have two hours of debate.

“You might have one grandstander,” President Trump said at his press briefing on Thursday. “It will pass. It will just take a little longer.” He has said he would sign the bill once it passes.

Massie’s office did not respond to a request for comment from NBC News.

Members have been scattered across the country as flights have been canceled and millions have sheltered in their homes amid the pandemic. Public health officials have said in the last 48 hours that anyone traveling from New York should quarantine for 14 days – which could affect many members of Congress. There are also two members who have tested positive for the virus and over a dozen more who are self-quarantining after possible exposure.

Massie has threatened to vote “no” on the package and told local and national media Thursday he was driving back to Washington for the vote. Earlier today, Massie tweeted the section of the Constitution that defines a quorum — a rule he could use to potentially derail the bill if enough of his colleagues aren’t present and voting.

The House needs a quorum — half its membership — to be present to pass a bill if any single member demands one. If no one asks for a quorum, it’s assumed a quorum exists. This is what would allow the House to act without a recorded vote, by voice or unanimous consent. There are currently 5 vacancies in the 435-member House, so 216 votes constitutes a majority.

Kasie Hunt, the host of MSNBC’s “Kasie DC,” is a Capitol Hill correspondent for NBC News.

Alex Moe is a Capitol Hill producer for NBC News covering the House of Representatives.

Related Topics:
Up Next

Dogs Being Trained In UK To Sniff Out COVID-19, Says Charity 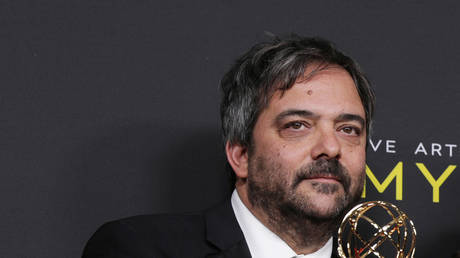 Award-winning songwriter and musician Adam Schlesinger has passed away after contracting Covid-19 and spending several days on a ventilator, according to his attorney. He was 52 years old.

The musician died in a New York Hospital on Wednesday, his lawyer Josh Grier told the Associated Press. Winning three Emmy awards and one Grammy, Schlesinger was perhaps best known for his work with the New York City-based band Fountains of Wayne and its Grammy-nominated single ‘Stacy’s Mom’.

He also wrote music for a number of films and television shows, including the 1997 comedy ‘That Thing You Do’ – directed by Tom Hanks, who has also contracted the coronavirus – and more recently was a songwriter for the musical comedy series ‘Crazy Ex-Girlfriend’.

The artist’s passing was mourned by thousands of fans, as well as his colleagues in the entertainment industry, hailing Schlesinger as “an otherworldly talent and inspiration.”

Adam Schlesinger was an otherworldly talent and inspiration to me. Still pinching myself for all the things we made together. You will be deeply missed, sir. The world is less without that thing you do.Our hearts go out to your family. pic.twitter.com/kHe8eOxjVi

Saddened by the loss of Adam Schlesinger. I was hooked the second I heard Radiation Vibe. Had the pleasure of playing behind Adam at a Cabinet of Wonders show. He was a real fun guy to play with & a lovely dude to talk with. Love to Adam’s family/friends: https://t.co/CuFBJccuHa

I spent a summer on Martha’s Vinyard with Adam Schlesinger. Paul’s Boutique dropped & he went ape-shit: “This is unprecedented!” We listened to it nonstop in his car on our way to get late-night subs (grinders) for our friends. I’ll never forget you. A genius then, now, & forever

RIP Adam SchlesingerOne of the best ever. Thank you for the inspiration ❤️

Schlesinger is survived by his two daughters.

The Trump administration backtracked Wednesday evening on new rules and said Social Security recipients won’t have to file a tax return to receive a stimulus payment.

The move is a response to pressure from elderly Americans and senators to rescind guidance from Monday that said seniors needed to file a return to get the checks of up to $1,200, even if they weren’t ordinarily required to file taxes, NBC News reports.

“We want to ensure that our senior citizens, individuals with disabilities, and low-income Americans receive Economic Impact Payments quickly and without undue burden,” Treasury Secretary Steven Mnuchin. “Social Security recipients who are not typically required to file a tax return need to take no action, and will receive their payment directly to their bank account.”

Treasury said the IRS will use existing SSA-1099 and RRB-1099 forms to make the payments to seniors. They’ll get a direct deposit if there is a bank account on file; otherwise they’ll receive a check in the mail.

Read the full story at NBCNews.com

In this AP U.S. Government and Politics class students will cover how the Electoral College facilitates and/or impedes democracy

AP exams in 2020 will be at-home, online tests. Check for more information.